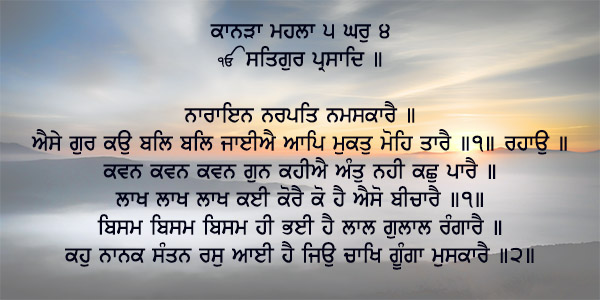 The one who bows in humble reverence to the Lord, the Lord of all beings.

I sacrifice myself to such a Guru, who himself is liberated, and He carries me across this world.

Which all of your glorious virtues should I chant? There is no end to it.

There are many many millions of them, but there are very few who contemplate on them.

I am wonder-struck and amazed and am saturated in crimson beauty of my beloved.

Says Nanak, the saints savour this sublime essence, like the mute person, who tastes the sweet candy, but only smiles.

Must See this video

Gurpreet Kaur’s journey in this world .... Gurpreet Kaur was a Musician. She was a singer and a composer of music. Her interest was composing and singing Gurbani Shabads in Indian Classical style. She sang Shabads in All the Raags mentioned in Sri Guru Granth Sahib Ji. She also taught Gurmat Sangeet at Gurmat Gian Missionary College, Jawadi, Ludhiana. Elder child to Pushpinder Kaur and Dr. Brig. Harminder Singh, was born in Amritsar on 13th Jan 1962. She attended various convent schools as a child because her father would get frequent Army postings as a dental surgeon. She graduated with Music Honors from Govt. College for Women, Chandigarh. Music was her hobby and she composed and sang Raag based Gurbani Shabads. Doing Kirtan was part of growing up nurtured by her parents. She learned music from her father Dr. Brigadier Harminder Singh who was a dental surgeon in Indian Army and a very good singer himself. Gurpreet’s Bhua (father’s sister), Ajit Kaur retied as a Head of Department of Music from Govt. College for Women Ludhiana, and was a renounced Punjabi singer of her time. Gurpreet Kaur also learned nuances of Indian Classical Music from Pandita Sharma. She was a mother of three children, and a grandmother. Her daughter Keerat Kaur is a Computer Engineer. Her two sons Gurkeerat Singh and Jaskeerat Singh are doctors in USA. Her daughter Keerat Kaur too was part of her group ~ Gurmat Gian Group. Gurpreet Kaur left this world at the age of 54yrs on 12th Sept 2016 in Baltimore USA. She had recorded around 25 cds of Gurbani Keertan. 'Raag Ratan' Album (6 CDs) is a Compilation of Shabads in All the 31 Sudh Raags of Sri Guru Granth Sahib Ji. 'Gauri Sagar' Album (3 CDs) is a Compilation of All forms of Raag Gauri in Sri Guru Granth Sahib Ji. 'Nanak Ki Malhaar' ~ ((3 CDs) is an album of Raag Malhar Shabads in various forms of Malhar. 'Gur Parsaad Basant Bana' ~ (3 CDs) is an album of Shabads in Raag Basant sung in various forms of Raag Basant. Har Ki Vadeyai Sarni Aayea Sewa Priya Kee Preet Piyaree Mohan Ghar Aavho Karo Jodariya Mo Kao Taar Le Raama Taar Le Tere Kavan Kavan Gun Keh Keh Gawan Mera Baid Guru Govinda Saajanrraa Mera Saajanrraa
View all posts by Manbir & Gurpreet →
This entry was posted in Shabad Kirtan and tagged Gur, Gurbani Sangeet, Gurmat Gian Group, Gurmat Sangeet, Gurpreet Kaur, Guru, Japjit Kaur, Keerat Kaur, Keertan, Kirtan, sacrifice, Shabad, Shabad Kirtan. Bookmark the permalink.